How to Teach W-Controlled Vowels

“I saw the crew make a low bow by the pew.” Wow, choosing the correct spelling choice for each of these w-controlled vowels can prove tricky for students! Researcher and literacy expert Louise Cook Moats says that teachers should “demystify spelling patterns” and help students make sense of spellings because they are more likely to remember something if they understand the why.

In this blog post, I will be sharing some facts about the letter ‘w’ to help you understand the logic of the alphabetic code used in reading and spelling. I will also be suggesting some ways in which teachers can aid recall of the w-controlled vowel teams: ‘aw’, ‘ow’ and ‘ew’!

Have you ever wondered why the letter ‘w’ looks like a double ‘v’ but is called ‘double u’? The Latin alphabet (from which the English alphabet originates) did not contain the letter w – the letter u represented a /w/ sound. It appeared only before a vowel, as in equus, /ek-woos/, the word for ‘horse’. 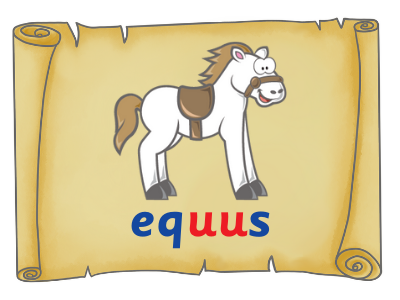 The /w/ sound eventually disappeared from many Latin words but it remained a part of Norman French, represented by ‘uu’. After the Norman conquest of England in 1066, the ‘double u’ was introduced to English as ‘w’.

By 1500 printing presses were in use across Europe. As the printing press evolved, so did the shape of letters. The letter w was initially made with a single ‘uu’ block or two ‘v’s if a single block was not available. 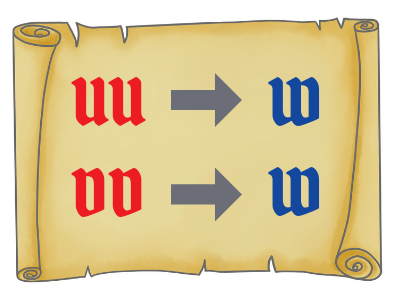 As printing became more streamlined, the double-u block was replaced with a double-v block so ‘VV’ represented /w/. ‘W’ first appeared in print as a unique letter in 1700 and became one continuous shape in handwriting.

The sound represented by ‘w’ is not /wuh/. The correctly pronounced /w/ is very similar to the /oo/ sound – the only difference is that the lips are slightly more closed when making the /w/ sound, That is why it is referred to as a semi-vowel. Listen to the correct pronunciation of /w/:


As you can see in the demonstration, to make the sound, you have to round both lips into a small, tight circle and raise the back of the tongue. The vocal cords vibrate while making the sound. The /w/ sound is a speech sound that has characteristics of both a vowel and a consonant – this is called a ‘glide’.

Because W is a semi-vowel, the vowel teams ‘aw’, ‘ew’ and ‘ow’ are referred to as ‘vowel digraphs’. Other vowel digraphs can represent the same sounds as these teams–including ‘au’, ‘eu’ and ‘ou’. In order to understand which representation should be used in a word, it is very important that students be explicitly taught the following spelling rule:

‘Words of English origin in the English language don’t end in the letter u.’

The w-controlled vowel ‘aw’ is probably the easiest to teach as it is what is called a ‘predictable’ vowel team – this team always represents the same sound. Students see and use the word ‘saw’ early in their literacy work so the team should be familiar.

Take care to initially avoid words in which ‘aw’ does not fall at the end of a syllable. You will, however, eventually need to teach students that ‘aw’ does appear before final ‘l’, ‘n’ and ‘k’, as in ‘crawl’, ‘lawn’ and ‘hawk’.

The /aw/ sound is a pure vowel sound which opens the mouth and leaves it open. Being left with an open mouth is uncomfortable for English speakers (I’m thinking of the flies in Australia’s summer!), so in many regions an /r/ sound is added to words after /aw/. This is the ‘tricky’ thing about ‘aw’: in some regional accents, students may struggle to hear the difference between, for example, ‘saw ‘and ‘sore’ or ‘paw’ and ‘pour’. This is why it’s so important to choose the correct accent when using Phonics Hero.

Top tip: I have found that it can be helpful to have students use their ‘spelling voice’’ and exaggerate the /r/ when there is an ‘r’ towards the end of a word so that they can hear the difference between such pairs.

The ‘ow’ w-controlled vowel can represent the long /o/ sound, as in ‘know’ as well as the /ow/ sound heard in ‘cow’. This is an example of code overlap and results in the ‘ow’ team being referred to as ‘unpredictable’. In actual fact, there is some predictability: ‘ow’ represents the long /o/ sound in nearly four times as many words as it does the /ow/ in ‘cow’. However, in reading, students may have to try both of the sounds represented by ‘ow’ to see which one makes sense in the word or sentence.

Top tip: Teach students about pattern frequency. ‘Ou’ is much more common than ‘ow’ when representing /ow/ as in ‘cow’ or ‘house’. This knowledge will help students with their spelling, because ‘ou’ can also precede ‘l’ and ‘d’. It precedes ‘nd’ rather than ‘n’ by itself.


Unravelling the mysteries of the English language can be just as intriguing for children as for teachers! When your students understand why we spell words the way we do in English, they are likely to feel more secure in their reading and spelling ability. And you may even create a lifelong interest in words!