R Controlled Vowels and How to Teach Them

An ‘R Controlled’ vowel is one immediately followed by the letter ‘r’ and which can no longer be pronounced as a long or short vowel.

In this blog, I will talk about effective ways to teach the R Controlled Vowels.

What Are the R Controlled Vowel Sounds?

The R Controlled Vowels sounds are: 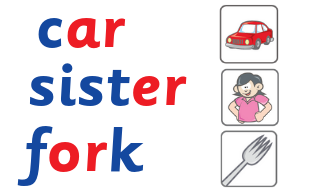 The ‘r’ following the vowel distorts the typical vowel sound, creating a new vowel sound (sometimes referred to as a ‘growl vowel’).In our Letters and Sounds progression of sounds, included in the Teacher’s Account (you can grab your access to our free core resources), you will find ‘ar’ and ‘or’ on level 6A and ‘er’ on level 6C.

What Are the R Controlled Vowel Representations? 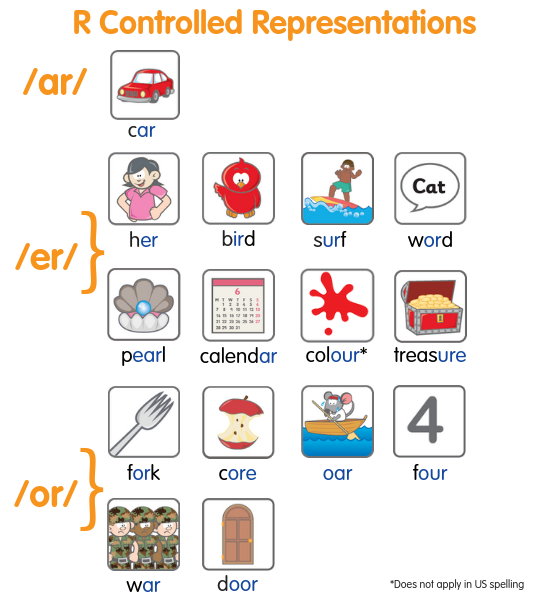 R Controlled words make up about 10% of single syllable words. In some phonics programs, the letter ‘r’ is called ‘Bossy R’ to help students understand the strong impact this consonant has on the preceding vowels. I prefer to use the mnemonic ‘R in Charge’. 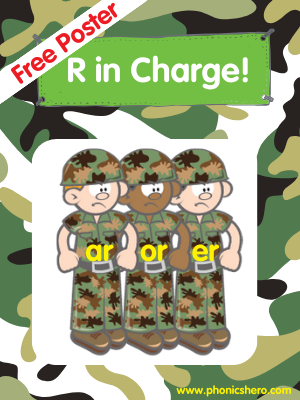 How to Teach the R Controlled Vowels

In systematic phonics instruction, you move from simple to complex and most common representations to less common. Because /ar/ is the most commonly used R Controlled Vowel sound and has only one representation, we use this to introduce what happens when ‘r’ is in charge. (N.B. The word ‘heart’ is an irregular, tricky word).

Use a ‘Compare and Contrast’ Strategy.

Have your students read CVC words containing short ‘a’, for example: ‘can’, ‘cat’, ‘cab’, and ‘cap’. Tell the students that the consonant ‘r’ changes the sound of the vowel immediately before it and read the word ‘car’ for them. Repeat the process with other CVC words, asking the students to read the word with ‘ar’ (there’s a worksheet for this in our ‘ar’ worksheet bundle below).

When counting the number of sounds in a word, ‘ar’ counts as just one sound, /ar/. You can help struggling students to remember this by using sound buttons for sound counting (as seen in the Letters and Sounds program). For example:

Notice how the ‘ar’ is underlined for the reader to indicate that it is a digraph – two letters are representing one sound.

Once the students can read ‘ar’ words, you can move on to the spelling of these words. A common spelling error of beginning spellers is writing the letter ‘r’ by itself for /ar/. This is a confusion of letter name and sound. Explicitly teach them that the letter name for ‘r’ is pronounced as /ar/ but this is not the sound it represents. The sound that the letter ‘r’ represents is similar to the sound of a puppy barking, /r/, as in ‘red’ and ‘run’. Remind the students of the mnemonic ‘R in charge’ – the letter ‘r’ must be in charge of a vowel when representing /ar/, so when writing /ar/ the vowel ‘a’ must precede the ‘r’. 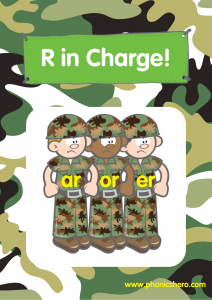 
Activities provided in the pack, or those you can make yourself, include:

The second most frequently heard R Controlled Vowel sound is /er/. It has quite a few representations. These representations and their relative frequency can be remembered with the sentence:

Knowing the frequency of each representation can help the student make an educated guess regarding the correct choice of representation, as there are no rules guiding choice in one-syllable words. I suggest that you introduce ‘er’, ‘ur’, and ‘ir’ together initially but make the ‘er’ representation your first focus so that the students can build confidence using the most common representation. There are some fun Internet videos on the three frequent /ir/ representations, for example: 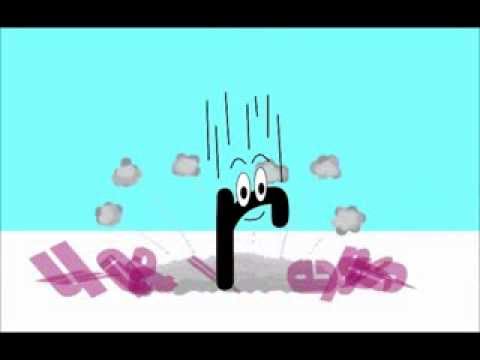 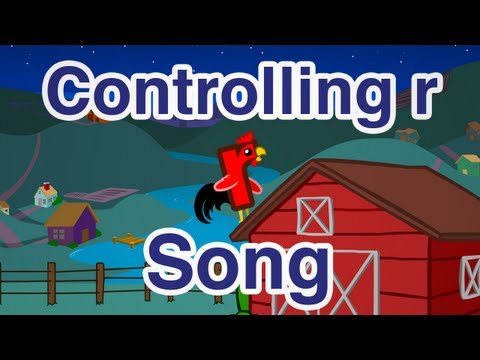 Or “Sing Your Way Through Phonics’ volume 1 Track 5. Listen to a sampler.

Point out the frequency of ‘er’ as a representation of /er/ to your students. Use the activities listed above, under Activities, to teach ‘er’ in one-syllable words. When ‘er’ is used in words of more than one syllable, this vowel-r combination still represents /er/ so you can move on to these words with confidence. The only exception is when the schwa sound is substituted in some dialects. I will explain this in detail a little later.

Reading the ‘ur’ representation of /er/, or any other R Controlled Vowel representation, is not hard once the student knows about R Controlled Vowels. Spelling using the correct representation is much harder so will require greater frequency, intensity, and duration of instruction. There are no rules indicating when you should use ‘er’ and when you should use ‘ur’ to spell /er/ in a syllable. Lots of activities exposing the student to the two representations are needed to develop visual and motor memory. In addition, I use mnemonics to help students learn some ‘ur’ words. Some are visual mnemonics. For example, you can make a u-turn. The words ‘curl’ and ‘curve’ contain the letter ‘u’ which looks like a curl or curve.

Some mnemonics are sentences based on the words ‘you’ and ‘are’ in text message format, e.g:

I haven’t found or created any really clever mnemonics for spelling ‘ir’ words (if you’ve got one, I’d love to hear it in the comments below). I sometimes remind students of the spelling in sentences such as: 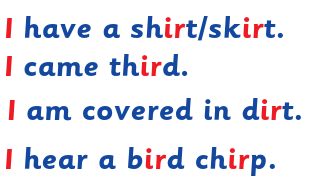 The existence of homophones (same sounds, different meaning and spelling) can make the spelling of a couple of ‘ir’ words more challenging. One example of homophones is this pair:

I use a combination of mnemonics and pictures to help a student differentiate between the two. A Christmas tree is often a fir tree. You can think of the ‘i’ as a strong trunk with a star on top. You can think of a furry animal you love curled up beside you and say ‘U r furry!’ The student draws the picture underneath the word. A student may come up with a better memory jogger than you (or I) can. The important thing is that the picture is meaningful and memorable to them.

The letters ‘or’ can be used to represent both /er/ and /or/, for example:

Students are used to seeing these letters as the word ‘or’ so I think it is easier for them to learn the connection with /or/ than the connection with /er/. Based on the philosophy that I want to make learning as easy as possible for students, I would teach ‘or’ as /or/ first, using the activities already provided. The ‘or’ spelling of /er/ is predominantly used after a ‘w’ in a one-syllable word. Students have two rules to learn in connection with the ‘wor’ spelling:

It makes sense to teach ‘wor’ and ‘war’ in the same lesson as both are under the control of both ‘r’ and ‘w’.

The ‘or’ combination can also be used to represent /er/ in the second or third syllable of a word, as in ‘doc-tor’ or ‘dec-or-ate’.

You may ask a student to use a ‘spelling voice’ when spelling such words, pronouncing the ‘or’ as /or/. The ‘or’ can be a morpheme, referring to an occupation such as ‘surveyor’, ‘inventor’ and ‘editor’. (Someone once told me that the amount of money one could make was indicated by whether your occupation ended in ‘er’ or ‘or’. It may work for ‘teacher’ and ‘cleaner’ but I don’t think it works for ‘lawyer’ or ‘boxer’, amongst others).

All of the vowels can be combined with ‘r’ to represent /er/. The ‘ar’ combination is used in words such as ‘dollar’, ‘vulgar’ and ‘polar’. Multi-syllable words ending in ‘ar’ as /er/ are often adjectives. The use of meaning can help students to correctly spell this representation.

When /ir/ is replaced by a schwa

In Middle English (spoken 1150-1500) the letter ‘r’ always represented a consonant sound. An ‘r’ following a vowel would have been pronounced in the same way as an initial ‘r’. Through the years, it came to also represent a vowel change before the ‘r’ heard in some dialects. The degree to which you can hear the impact of the ‘r’ in each of the R Controlled Vowel sounds depends on the accent of the speaker. For example, the ‘r’ is likely to be more pronounced when the speaker is of Scottish or French origin. In contrast, in some dialects of English (for example, the Australian dialect), the /er/ represented by ‘er’, ‘ar’, or ‘or’ is not more pronounced but rather replaced by a schwa sound (Learn more about the schwa), usually in unaccented syllables. Try saying: 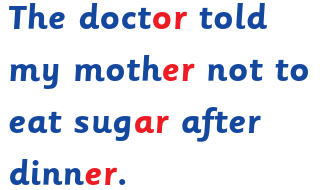 For the red representations, do you hear the /ir/ pronounced? Or do you hear the sound /uh/ (like the sound someone makes when trying to think of a word)? The schwa is the most common vowel sound. It is because of schwa substitution that it is so important for students to get used to reading the words with unaccented syllables containing an R Controlled Vowels before they are asked to spell them. When they do spell them, you may ask them to use their ‘spelling voice’ and exaggerate the /ir/.

Complex representations such as ‘oor’ and ‘ear’

For ‘poor’, I ask the student to visualise 2 empty pockets and for ‘floor’ 2 round mats on a floor.

When R is NOT in charge:

2 responses to “R Controlled Vowels and How to Teach Them”