When to Teach Letter Names

I recently received an email posing this question:

We are teaching systematic phonics to our little ones, but we are conflicted as when to teach letter names. When and how should letter names be taught to children?”

The timing of the introduction of letter names is important, so I’ll frame my thoughts using the Goldilocks principle – not too early, not too late, but at just the right time. It is a developmental concern, rather than a grade/year- or age-related concern.

Should you teach letter names or sounds first?

Letters are used as a code for the sounds in our speech so are meaningless without knowledge of the sounds. Any squiggle/shape could represent a sound, for example: 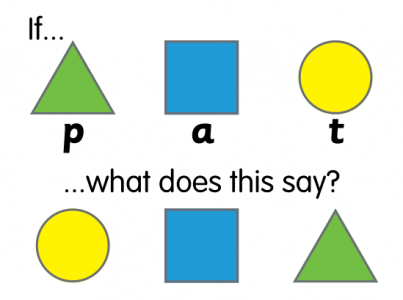 You still managed to read this with your new knowledge of our shape code!

Letter names provide abstract labels for the letters, not representations of how the letters actually sound within our language. That is why teaching a child to sing the alphabet song before the child receives formal reading instruction has limited value. The first important step towards literacy success is development of phonemic awareness and not letter name singing.

Why not teach letter names and sounds together?

So, if letters make no sense without sounds, why not teach letter sounds and names side by side? The simple answer is because of the cognitive load. Working memory has to work hardest when a task is novel and therefore has a heavy cognitive load. For the beginning learner, identifying individual sounds in a word, from left to right, is quite a novel task. Forming letter shapes and discriminating between letter shapes are novel tasks. Remembering the name of a letter is a novel task. Linking a specific letter with a specific sound is a novel task.

Is it any wonder that some children, especially those with a weak working memory, struggle with reading and spelling? Cognitive load theory makes it clear that we can and should do what is necessary to reduce cognitive load. It is not necessary for school beginners to know the names of letters for reading and spelling, so, in my opinion, the teaching of letter names should be postponed until letter names are necessary. This allows students to begin to write and read more quickly. When the child is spelling, the prompt can be: Letter names will not help a child to decode words: the word ‘cat’ is not read as ‘seeaytee’. While some may argue that teachers can use aspects of letter names as cues for students to identify the sounds they represent, the potential for confusion outweighs any benefits if letter names are introduced too early.

Children learning to read who have received more instruction in letter names than letter sounds are more likely to look at a word and read:

Children learning to spell who have received more instruction in letter names than letter sounds are more likely to use letter names in their spelling e.g. It will be harder for a teacher to help children who have not been taught letter names with their spelling. In the photo below, you can see what a five-year-old, who doesn’t know the letter names, produced when she asked how to spell ‘bean’ and the parent responded with letter names: If a child asks how to spell the long /ee/ sound in ‘beach’, it is not appropriate to say “Write /eh/ then /ah/”, because blending those sounds together does not create the long /ee/ sound. You must use letter names e.g. “We spell the long /ee/ sound in ‘beach’ with the letter ‘e’ followed by the letter ‘a’. They make a vowel team.” Similarly, if you ask a child how ‘seek’ is spelled, it is not sufficient for the child to say “/s/, long /ee/, /k/” because there are several possible spellings for each of those sounds. Developing the language that allows discussion of letter-sound correspondences is important to reading and spelling success.

When you are helping a child to encode or decode an irregular tricky word, you need to be able to draw attention to the parts that are not regular, for example by saying “The letters ‘a’ and ‘i’ together in this word, ‘said’, are representing the short /e/ sound.” Irregular words cannot be fully sounded out so knowledge of letter-sound correspondences is insufficient.

Research indicates that letter name instruction will actually strengthen letter sound knowledge. When a student understands the way in which the alphabetic code works, letter names become important. Many letters have more than one possible sound, and many sounds can be produced by a variety of different letters, so it is important to be able to reference each letter independently of the sound it makes.

Teach letter names when they are needed:


How Do You Teach Letter Names?

Follow the order of your synthetic phonics program in choosing which letter names to teach, when. Using our earlier example, the c/k/ck alternative spellings of /k/ are the first typically met in a synthetic phonics program (in level 6 of Phonics Hero’s Playing with Sounds order and level 2A of Letters and Sounds, so these should probably be taught first, then the letters that make up consonant digraphs (l, s, f, h, t, w, n and g).

In order to have true fluency in letter recognition, children must be able to identify letters and say their names in and outside of context and in and out of sequence. It’s not just accuracy, but also automaticity, that contributes to long-term literacy success. Here are a few ideas for developing automaticity in letter naming:

Once the student can accurately name all 26 letters, return your focus to letter-sound correspondences. There are many more sounds than letters to learn and knowledge of those correspondences are key to reading and spelling successfully!

Still have questions about how or when to teach letter names to children? Leave us a comment below!

5 responses to “When to Teach Letter Names”