How to Teach Alternative Spellings

At the next level of understanding, they are taught that two or more letters can represent a vowel or consonant sound.

Long vowel sounds have multiple spellings, often using two or more letters, and are usually taught first at this level because every syllable in a word contains a vowel sound to be represented.

For reading, students also need to know that one letter, or a combination of letters, can represent more than one sound.

To complete the teaching of the code, alternative spellings for consonants and less common vowel sounds are usually taught.

Make the Student Aware of the Alternative Spellings

Choose the alternatives you want to focus on right now. The number of alternatives you explicitly teach at any one time will depend on the skill level of your students. If I am working with a group of students with specific learning difficulties, I would typically only teach two new alternatives at a time, usually alternatives that are hard to confuse.

I recommend that students build, or are provided with, a sound chart on which alternative spellings are recorded. Usually these are presented in categories – consonants and vowels (short, long and r-controlled). You can download these for free. One example is this chart created by The Dyslexia-SPELD Foundation. Another is the Alphabetic Code Chart of Phonics International, pictured below. A teacher will typically give students examples of words with the focus spelling (used in spelling instruction and reading practice) and encourage students to think of/look for more words with the same pattern in order to develop a word bank. These words would be scribed under spelling headings. The students might be asked to copy the words, using a different colour for each of the alternative spellings. A student sorting through the /ai/ words.


Teachers often have Word Walls in their classroom. These typically organise/display words alphabetically, using their initial letter. They reflect a print-to-speech approach to teaching. In synthetic phonics instruction, which reflects a speech-to-print approach, the initial letter of a word is regarded as no more important than any other letter in the word. A Sound Wall is a more appropriate tool than a Word Wall for making students aware of spelling alternatives and the placement of these in words. A Sound Wall displays words organised by speech sounds (phonemes), typically in two sections, vowels and consonants. Words containing the sound in any position in the word are listed. A Sound Wall usually provides a visual reference, a key word and/or manner of articulation. You can read more about Sound Walls in this blog post.

Give the Student Information About the Alternative Spellings

In spelling and reading, an informed choice of alternative is always preferable to an uninformed guess, so a teacher should try to provide as much useful information about an alternative as possible. This includes: 
Some charts will only show the first 6 alternatives. The order may vary a little from chart to chart. While the typical positions are shown, a spelling may occur in another position less frequently, for example ‘ai’ can represent the ‘long’ a sound in initial position in words such as ‘aid’ and ‘aim’ but it is most frequently found in the middle of a word.

Sometimes a rule of English spelling will help the student determine which alternative he can use. For instance:

Any pertinent spelling rules should be explicitly taught. A rule may also be related to grammar, for example, ‘ae’ is an irregular plural spelling, as in ‘antennae’.

Knowledge of word origin can sometimes assist the correct selection of spelling alternative. There are quite a number of French spellings of the ‘long a’ sound, such as ‘e’ with an acute accent, ‘e-e’, ‘ee’, ‘ait’ as in ‘parfait’ or ‘et’ as in ‘ballet’. The French words we have adopted in English often relate to food, dance or entertainment. If a student knows this, he is more likely to spell or read a word correctly. Once upon a time, the “gh” in ‘aigh’ and ‘eigh’ did represent a specific sound – one we don’t have in English today. That back-of-the-throat fricative sound is found in German, and if you look for the German counterpart of English “gh” words, you will often find the sound there, for example, eight…acht, neighbour…nachbar. Word origins can be fascinating!

The part of speech a word plays can sometimes determine the choice of spelling. For example, when thinking about the homophones (words which sound the same but are spelled different) practice/practise or licence/license, it is helpful to know that ‘ce’ is used for the noun and ‘se’ for the verb. There are also many spellings of /l/ and the adjectival suffix is usually spelled ‘-al’.

So, when a student embarks on representing a ‘long a’ sound, the teacher can ask him to think about where he hears that sound in the word, about what the most common spelling in that position is, about the rules of English that apply to the spellings and what, if any, clues he has about word origin.

A mnemonic can help students recall some spelling alternatives, in particular those contained in homophones (e.g. new vs knew). That mnemonic might be a phrase, a sentence, a visual cue or a song. I use a little sentence to help students recall the words most commonly using ‘ea’ to represent ‘long a’: “Dad cooked a great steak on his break.”

I get the kids to illustrate the sentence to aid memory of the words. Phonic Books UK has free posters you can download containing an illustrated sentence that reminds students of spelling alternatives. The one for ‘long a’ is: Baby snail munches kale on a great big tray’. The company also produces free downloadable alternative spelling infographics that you can display in your classroom.

Look for letters in a word that will help the student remember the spelling of ‘long a’. Examples include:

great – ice cream is great to eat (different to ‘grate’)

There are numerous songs and videos that can be shown to introduce spelling alternatives to children. English4abc has produced a song for remembering the first three representations of ‘long a’: 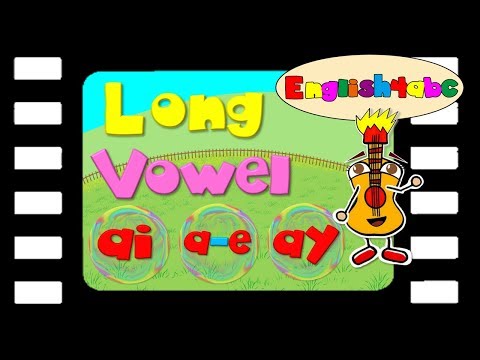 Give the Student Frequent Exposure to the Alternative Spellings

The keys to mastery and automaticity are frequent exposure and practice. Here are some ideas for achieving this: 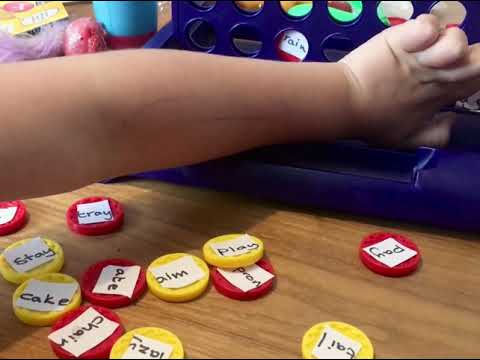 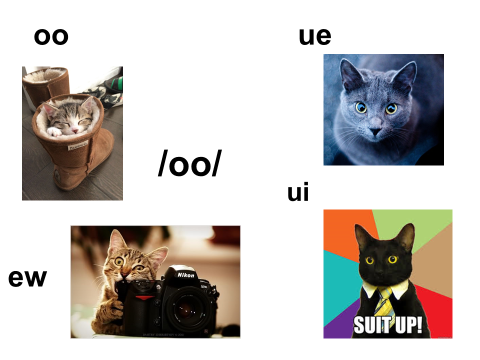 Remembering phonic alternatives may not always be easy, but I hope that at least one of the strategies for mastery discussed in this blog will inspire you and your students. A spiral and frequent review approach will be most effective in consolidating knowledge of the alternatives.

One response to “How to Teach Alternative Spellings”